….This was my instant first reaction when receiving the call for participation from IE’s Rugby club a few weeks ago. But these guys were smart; they were fishing for new members by highlighting the clubs upcomming trip to a tournament in Barcelona.

Reason enough for me to read the email once again and actually notice the addition “touch only” for girls. That can’t be too bad…especially since even though being in love with Madrid I was looking for a good reason to check out Barcelona as well. So this was decided, a friend and I signed up, used our best persuasion skills to get more girls on board and hit the rugby fields soon after. And what an experience to come after that first step! We were training with the guy’s team once a week, getting awesome support from them and a smooth as can be introduction into this new sport for us. And I can only say it’s not as bad as it sounds, it’s great fun to play with the team and it’s the best to get some fresh air and out of our beloved study rooms for once!! The girl’s team also did spend some considerable time on planning the Barcelona trip and our rugby apparel I have to admit.

Finally, on the last weekend of November the unofficial party-bus left for Barca for 2 days of Rugby-mania in competing for the Iberian Cup against IESE and ESADE. The low-down: 23 players (18 guys, 5 girls), 3 matches, a lot of mud, a lot of laughs, 1 dislocated shoulder, BUT: both trophies!!! I can proudly announce that the IE’s guys and girls team are now the official holder of the Iberian Cup trophy, for what I know the first time in IE history. That fact was duly celebrated in Barcelona and is still a fond memory and quite probably also some people’s greatest (academic) success so far ;)

And the story will be continued…we are aiming to defend our success next year with an even stronger team hopefully supported by our first sponsor. Yet before that the infamous “Spring Fling” is coming up in spring 2011. It is another business school sports competition involving a variety of different sports where we will make sure to impress and build on IE’s rugby reputation.

High Times people, get on board!

Theresa is a current MIM student 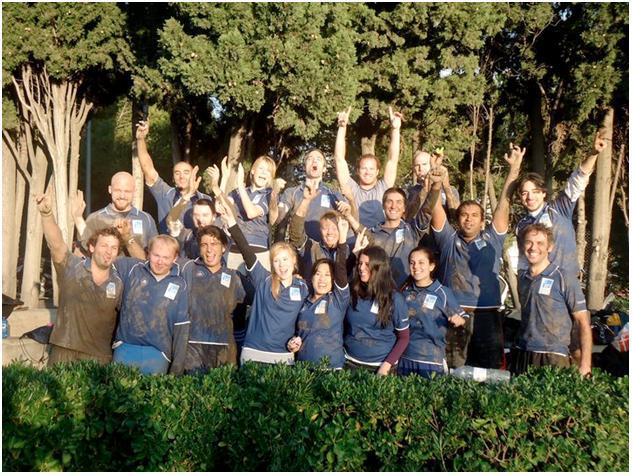