After Exam Party at Fortuny 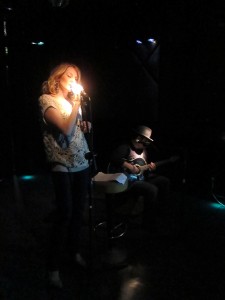 Last Tuesday was the After Exam party for students from the different masters of IE. Organized by IE student, David Coutinho, the party was held at one of Madrid´s most emblematic clubs, Fortuny; only 15 minutes walking from the IE campus.

The official start time was at 10 pm, but of course only at around 10:30 pm did students slowly start to roll in. It was Champions league night and many students had different dinners to attend to due to the after exam celebrations, which led different groups to arrive at different times.

However, two of these students could not afford to arrive late, because they were the opening act for the party… Rie Ruby-Johansen (current MIM student) as the main vocalist and Paul Baroudi (current IMBA student) as vocalist and guitarist.

Rie is from Denmark and started singing in musicals when she was younger, which later developed into a passion for jazz, funk and soul. Paul started playing the guitar when he was 13 years old and soon after began playing at bars in his home city of Beirut.

Rie and Paul met because they both joined the IE band and began practicing for the performance one week before (which is remarkable not only because they managed to find the time to do it within a very demanding exam study schedule, but also because it seemed that they had played together for years…). They played a mix of genres (all cover) with their own acoustic versions of songs such as “Cosmic Love” and “Rhythm is a dancer”. We hope to see them again soon at other events!

After the concert, the club was fully packed, and the DJ played the night away, which the students happily embraced because they had no classes the next morning…

Getting help with my CV: IE Career departmentMy Madrid I: A random walk in the centre of the city