Beyond advertising: Innovation in Communications and Branding at BBVA

Q: How can you make #BBVA a trending topic on Twitter?

A: When Justin Bieber tweets about the great time he had at the #BBVA Celebrity Basketball Game.

A recent study concluded that only half of Spanish adults remembered having seen a television commercial for a bank on TV, and of those who remembered seeing a commercial, only 20% knew which bank the commercial was advertising. Couple this statistic with the fact that almost three quarters of internet users trust online reviews as much as they trust personal recommendations and that consumers no longer trust corporations at face value.

Thus, what are corporations to do? Companies that don´t or can´t adapt to today´s realities are about as doomed as the dinosaurs in the aftermath of the 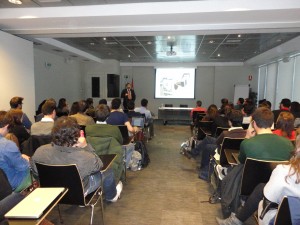 meteor strike, relates Ignacio Villoch, who works in Innovation in Communication & Branding at BBVA. Villoch came to speak to a crowd of 90 MIM students about recent innovations in marketing and communication initiatives at BBVA. These initiatives include branching out into new fields, including sponsorships and branded content, as well as into new formats, such as mobile apps and new types of infographics.  Apart from sponsoring well-known athletes such as Iker Casillas and Andrés Iniesta, BBVA has also chosen some atypical brand ambassadors, such as Carlos Soria, a 73 year old mountain climber from Ávila who continues his adventure of scaling all 14 mountains over 8,000 meters high. BBVA´s branded content includes the web series ¿Quieres algo más? and El fútbol nos vuelve locos, both of which have been well-received by the critics.

In sum, by providing content that is relevant, entertaining or informative, and shareable via social media, companies can not only reach audiences, but they can build more meaningful relationships with their customers, which adds significant value to a company´s financial bottom line. For BBVA, this has meant a notable surge in business on days after the Liga BBVA teams play.