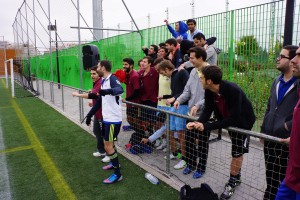 Friday, November 17th, the September intake took part in the MIM Cup football tournament, the first MIM Cup event of the year. And while the ladies performed notably well on the field, it was the gentlemen that stole the show with creative sideline cheers and indomitable team spirit!

The first goal of the tournament was scored during the men´s first round game by the multi-talented Leah Wald of Team Ford, who showed plenty of grit while playing alongside the boys. Ana María Trebolle of Carnegie and Sandra Crespí of Rockefeller also showed of fancy footwork while braving it on the field with the men.

In the ladies´ games, Marian Arias started things off well for Carnegie in the best possible way, scoring in the first five minutes of the game, despite never stepping on a football field in her life. Other notable players were Carol Zapata of Rockefeller, who played brilliant as center forward, Latifah Al Sayed of Ford, whose energy infected her whole team, and Gvansta Panchulidze of Vanderbilt, who was the most stylish goalie we´ve ever seen. Kudos to Marco Cartasegna, who, despite two bloodied knees, made for a jovial but effective and tough referee.

While the girls played, the boys cheered. Marc-Antoine Kassis and Zaid Al Kailani, both of Team Rockefeller, led the cheering section in an inspired sideline dance routine that started off with a version of Psy´s Gangnam Style, gradually morphing into various other dance styles, including a Latin-inspired conga line, before they rushed the field to congratulate the winners.

The tournament was won by Team Carnegie, but we have to admit, everyone acted like winners! 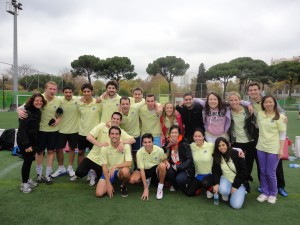 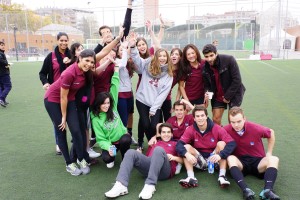 Nita Swinsick Directora Asociada de Admisiones: “El Master in Management es una experiencia única”Why it is important to have a hobby while studying your master!