Group Work – Hate It Or Love It? 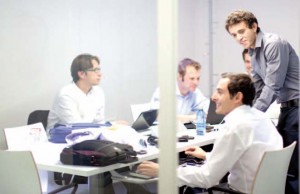 Michael Jordan might be the greatest basketball player of all time. In 1986-87, he had one of the most prolific scoring seasons in NBA history, scoring over 3,000 points. But from 1987-1990 Jordan had an Achilles heel, the Pistons. The Bulls met and lost to the Pistons in the Playoffs for three consecutive seasons. All that changed in the 1990-1991 season when the Bulls beat the Pistons in a surprising sweep. So what do Jordan and the Bulls have to do with IE?

Some say that a part of the Bull’s success is because Jordan changed from an individual on a team to a player leading a team. And if there’s one thing you should know about IE, is that it loves group work.

But with people from all around the world working together in stressful environments, sometimes this doesn’t always go down so well; expect possible conflicts, and expect a lot of them. True, you might be blessed with a group with none at all, like vultures on diets eager to share, but chances are slim. You’re more likely to find yourself in a group where someone or several people have completely different working styles compared to your own. When you want to go “left”, some might want to go “right”, and vice versa. However, together you have to figure out how to go straight which often is easier said than done.

I think the two most important things I have learned so far are:

Sound silly? It’s not. You’re far more willing to go the extra mile on a group project for someone you consider a friend; and you’re also far more likely to actually pay attention to what they have to say.

As I see it for now, group work isn’t about proving who’s right and who’s wrong. It’s about getting the job done the best way possible; and although I might sound like I know exactly what I’m talking about, I assure you, I don’t; I’m still learning, a lot.

Some might say that IE gives it too much credit and puts too much focus on group work. I disagree; because if you can’t figure out how to work in a group when only your grades are on the line, how will you fare when you graduate and your job is on the line?

Group work, hate it or love it?

The most important thing is to make sure you learn from it.

Since Easter Break, the MIMs have been non-stop!Exchange Students at IE