On the week of the 21st-25th of October it was the turn of the Master in Management February intake 2013 students to embark on the Global Immersion Experience, this year, with a new destination..Rio de Janeiro!

Organized with the support of the Fundação Getulio Vargas/EBAPE, the students took part in a series of company visits and academic sessions that focused on “Doing Business in Brazil”. The agenda presented a vision of political, economic and social aspects of Brazil so that students could better understand the challenges and opportunities currently happening in this rising BRIC country.

MIM students visited the Operations Center of Rio de Janeiro, an impressive multi story complex, that was created with the objective monitoring and optimizing the day to day functionality of the city. The first floor hosts the control room, the administrative headquarters on the second floor, and the “crisis room” – where the emergency situations are discussed and decided, on the third floor. The entire operations Center Control room runs the largest screen in Latin America, composed of 300 monitors and controlling over 800 cameras strategically placed throughout the city of Rio de Janeiro.

One of our MIM students, Matthew James Roy (United States), shared his thoughts about this Operations Center: 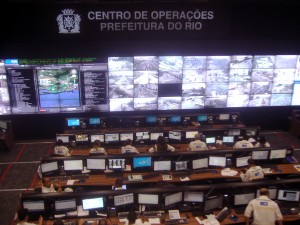 “The exterior of the Rio Operations Center is very unassuming, but what’s inside is very impressive. The Control Room, for example, holds the largest screen in Latin America and also 400 operators who monitor more than 800 cameras, reporting issues in traffic, utilities and weather. All of this technology and coordination reminded me of the NASA facilities. The Center was formed in response to flash flooding in 2010 and integrates 30 city agencies into a single control center. Its goal is to keep Rio running smoothly and to predict/respond to emergencies.

The Crisis Room is the place where the mayor and others meet whenever a pressing issue must be solved. The Center uses real-time data (from City Hall, the Police Dept., etc.) to create a map with 60 layers of information. For example, the exact location of every policeman in the city, along with their details (even smartphone battery level!) Another map shows handicapped people’s addresses—very useful whenever an evacuation is necessary.

The Center never closes and has media on-site who can quickly disperse information to city residents. Having explored Rio from the outside, seeing the Operations Center allowed us to see the great progress being made in this important city. It is becoming safer and being prepared for the coming events.”

Another part of the trip to understand the Brazilian market was the visit to Central Globo de Produções, aka “PROJAC”, one of the largest media and film production center in the world and the largest in Latin America, with an area 1.6 million meters squared.   Also, the visit to the Community Project of Santa Marta and the Peace Keeping Police Unit that has pacified one of Rio´s “favela’s”, and a presentation and private tour of the Windsor Altantica Hotel, one of the largest and fastest growing hotel chains in Rio de Janeiro.

Between the academic sessions, the company visits and the cultural activities such as the Corcovado Visit, the Sugarloaf tour and the important Brazil Cup 2013 match at Maracanã stadium, the students were able to take home a new idea of how business is done in a growing economy, where the weather is always lovely and the carioca attitude is inviting, welcoming and contagious. 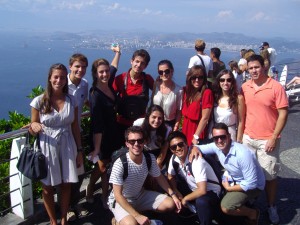 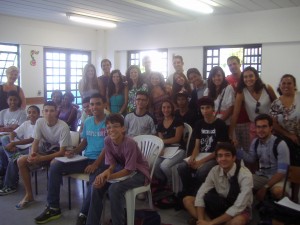