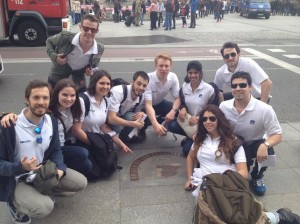 Sunny spring day, team spirit and an unyielding desire to explore – these are the best words to describe a MIM scavenger hunt, which took place on April 4th.  The mission included 38 assignments and required a basic knowledge of the city, readiness to have fun, a will to win and a good physical shape that students proved during their basketball team building competition.

After joining our colorful teams, each of us was given a list of tasks to complete. Each team took its time to decide on its strengths and appealing tasks and the teams were off to the different corners of the city.

As fun-loving professional explorers each team was fast at prioritizing and the elaboration of its strategy. Red and white teams started the competition as competitive hawks going in tie for the first hour of the game. The other two teams chose to go into blue waters and tap the unspecified 39th point of student networking from the very beginning. Even if the formal victory was never a matter for these two teams, the point of team building and finding the best gin tonic in the city might well have been achieved.

Taking pictures with a peacock in Madrid’s Retiro Park, running across the road with no street lights, exploring a rainforest in the train station, making all bus clap for a video or interviewing dumbfounded by-passers on their experience in the city – all this and much more side activities – is the ultimate summary of MIM scavenger hunt. 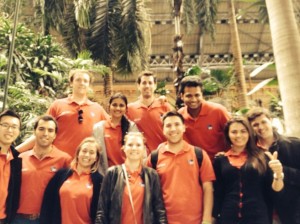 Sum-up: almost all tasks completed, half of Madrid seen by foot, tired as hell, equally happy, finally feeling there is life beyond Salamanca neighborhood, and there are cool people apart from your class.

Scavenger hunt was concluded in one of the best bars in Madrid where determined hunters were given some free beers, Latino music and tons of positive atmosphere. This was a very early non-Spanish type of clubbing which left the tired advanture-seekers with plenty of time to recover before a proper 2-to-6 Madrid party night.

Venture Day Madrid May 2014…better than ever!Facebook-WhatsApp: a costly deal?