Post by Eric Bean, current Student of the Master in Management February 2014 intake 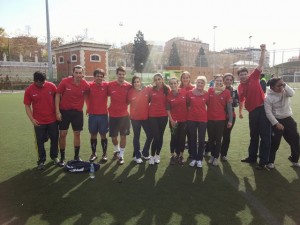 The mood was mixed as MIM students gathered on the soccer pitches of Golf Canal early on Friday morning, March 28th. The sun rose to greet their tired eyes and music from the DJ booth blasted their tired ears, priming everyone for the day’s excitement.

Hoping to get an edge on their competition, it seemed that students had taken it upon themselves to organize team-building activities the night before. Although some students looked worse for wear, the air was rich with camaraderie as everyone stood around laughing and joking about what had happened the night before.

All thoughts of the night melted away as the ref’s whistle blew to signal the start of the first game. The collective mindset snapped to futból as the inaugural event of the Master’s Cup got underway!

Although the white team was undoubtedly the most attractive, they weren’t able to contain the fury of the red team in the first match. Next door, the dark blue team held their lead against the light blues in a nail-biting thriller.

Next up came the girls in what turned out to be the most exciting matches of the day. Filled with hard tackles and some spectacular golazos, you might have thought you were in the Bernebeu watching these ladies duke it out. On one occasion, the crowd had to hold their breath as a particularly strong tackle from Catalonian professional defender Sofi left the Colombian all-star midfielder Laura down for the count. Luckily we had a professional EMT in our midst, and Pepe arrived at the scene to kart Laura away. Thankfully Laura’s medical diagnosis revealed no broken bones, and she was soon cleared by the medical team for further participation.

After the girls’ games came time for the co-ed games, which were the friendliest of the day. The sun fluttered in and out of the clouds as substitutes came on and off the pitch. The mood was quite merry as the final rounds of pool play were concluded.

At long last, the moment of truth had arrived. Anticipation grew as program director Kystina Dos Santos stepped up to the mic to announce which two teams had qualified for the final match.

“The final match will be between…… the red team and the dark blue team!” she proclaimed, amidst groans of disappointment and cheers of adulation. 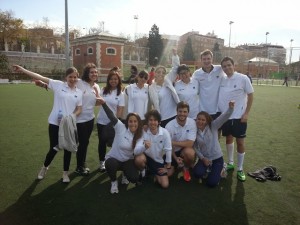 The crowd gathered around the pitch as the two teams warmed up, everyone hoping to get a good view of the epic battle that would soon take place. The first half did not disappoint. The red team put on an excellent display of offensive talent, only to be met by an impenetrable wall of blue defenders.

Cheered on by Yuriy Putin, their coach, chief strategist, and head cheerleader, the reds would not be denied. They continued their relentless attack, which eventually led to a beautiful goal right before halftime. This opened the floodgates for many more, and red ended up winning by a considerable margin.

No hard feelings resulted, however, and students from all four teams and across all three sections left the park arm in arm, better friends then they were before, and ready for siesta.

Second round of Live Tweeting Session today!Venture Day Madrid May 2014…better than ever!