Yury, you just came back from Rio de Janeiro as part of the Global Immersion Week program. How was it?

“It was absolutely unforgettable! I fell in love with Brazil and I honestly think that Rio is the most beautiful city that I’ve ever been too! We had a very busy but extremely interesting program. I am still overwhelmed by the impressions.” 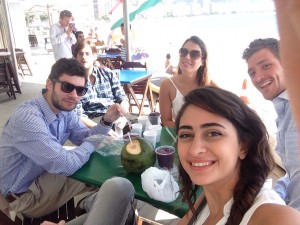 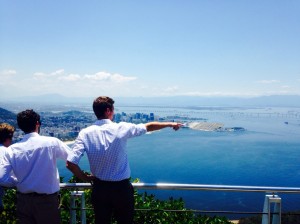 Sounds great! But let’s start from the beginning. What is Global Immersion Experience and why did you decide to participate in it?

“IE is known for its diversity and internationality. In total, we have around 80 nationalities on campus and it’s not unusual to have 40 different nations represented in one classroom. So, for a school like that it’s important that the students get exposed to different cultures and business environments not only in the classroom, but also on the ground. Hence, the Global Immersion Week, or in other words, a week-long trip to one of three countries on offer that includes meeting with local business leaders, attending lectures and simply diving into the local culture.

This year the countries offered by the MIM program management were Brazil (as one of the most promising emerging markets), Israel (a start-up paradise and the next Silicon Valley) and Ghana as an example of the country that runs a successful micro-financing program. I chose Brazil because of my interest and experience in emerging markets, and the scholarship covering the travel costs, which I received from the program was one more argument in its favor. Even before we boarded the plane to Rio, we were very well prepared for the trip. The program director developed a very thorough brochure with the information on the country and the plan of our stay.”

And what was in that plan?

“Our program in Brazil was very intensive and consisted of two parts: meeting major local and global businesses and visiting famous touristic spots.”

Let’s start with the business part of our program. Whom did you meet in Rio? 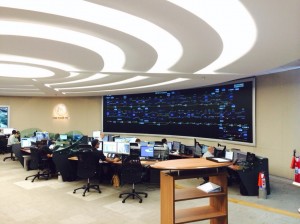 “Our first visit was to Globo TV, a major TV company in LATAM and Brazil’s biggest TV channel. If you look at the Rio landscape you can’t help noticing Globo TV’s satellite plates almost on each roof. We visited the real Brazil’s Hollywood with its huge pavilions, many offices and studios. It was like a city within another city! This is where all major Brazilian telenovelas are being shot. Although not a big telenovelafan myself, I founded it anyhow extremely impressive.

But let’s come back to the business part of our week. Next, we visited Invepar, a large business group which operates in the transportation infrastructure segment in Brazil and was in particular responsible for ensuring reliable and trouble-free infrastructure during the Football World Championship this year. We were even allowed into the Rio Subway control center and could see with our own eyes what it takes to manage infrastructure in a large city like Rio de Janeiro.

Another extremely interesting meeting was with the management of the Morar verde carioca project – a social initiative to rebuild and modernize infamous Rio slums (or called “favelas” in the local language). More than 20% of the city’s population live in informal settlements which are almost inadequate for living. Next to luxurious hotels and beautiful houses you can’t help noticing the sharply contrasting slums on the hills.  They create favorable environment for crimes and social problems. We met with the people responsible for the Morar Verde carioca project aimed to help the situation in one of the favelas. It envisages rebuilding the houses, setting the infrastructure and working with young people living there. We were inside a typical Rio slum and even had lunch in a local restaurant. By the way, the food was excellent and the prices were very reasonable!

Another bright impression of the trip was visiting the City of Rio de Janeiro Operations Center that was created several years ago to fight against natural disasters and emergency situations. Operators gather and process the information on weather forecast, infrastructure readiness in case of force majeur, etc. and have the most detailed information on each house available, for instance, if there are handicaps living there and their point of contact. It is brand-new center that employs 900 operators who work 24/7 using the most cutting-edge technology.

Then, there was Meu Porto Maravilha – an old shabby port which will be rebuilt into a modern downtown neighborhood. The most interesting thing is that it is going to be done using very innovative financial models, so it was also relevant from a business stand-point.

Also extremely impressive was the visit to General Electric research center located on the ocean shore with a magnificent view out of the windows and superb working conditions with relaxation rooms, café, gym and much more. Instead of the planned one hour we spent three hours there and would have even stayed longer – there was so much to see and hear!

In fact, there is so much to tell about our stay in Rio, because the program was very rich, but I think I have to stop here to spare the time of the readers.” 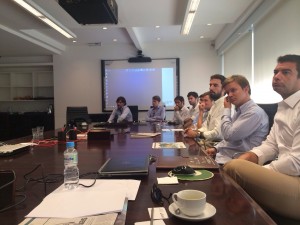 Our trip was extremely well organized thanks to the efforts of IE graduates, IE professors, namely,  Jesus Guerro and of course the program management,  particularly, Krystina dos Santos. Thank you all very much!

Looks like you were really busy in Rio! Did you manage to get some rest and visit at least a few tourist spots?

“Of course! We saw all major places of interest and had an unforgettable time in Rio! It was an absolutely unique experience for me. Visiting so many different businesses and seeing the city’s many faces – from the “Beverly Hills” to favelas – was an eye-opener for me! Besides, it was a great team building for the group. The trip helped us get to know each other better and become real friends. In one word: amazing! Now I know where I will spend my next vacation after the graduation!”

Thank you very much, Yury, and good luck with your finals!

Key dates for the February 2015 intakeLet’s go to Ghana with the Global Immersion Experience!