During IE’s recent i2i Consulting Lab, MIM students were faced with a challenge that even the most seasoned Bitcoin entrepreneurs have yet to solve: how to achieve the widespread understanding and use of the digital currency. 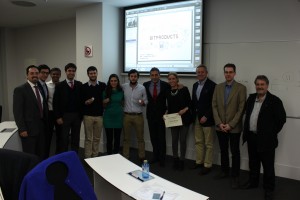 One solution: give Bitcoin away for “free” as a promotional reward for grocery store purchases. That was the gist of the proposal from the winning team made up of Andrea Zaga, Arturo Iglesias, Italo Aquiles Pizzolante, Itziar Maroto, Juan Ignacio Ramón, Paula Virosque, Rocío Sánchez and Rodrigo da Rosa.

They were one of the 42 teams made up of a total of 318 Master in Management students who were tasked with finding ways to improve the utility and usability of Bitcoin.

Students started the weeklong project by getting out on the street and talking to shop owners and potential users of Bitcoin. With their market research in hand, they used Design Thinking Methodology to analyze their findings and come up with creative solutions.

The top seven teams made presentations to a panel of judges, made up of Bitcoin entrepreneurs including Nicolas Cary, CEO of the leading Bitcoin wallet, Blockchain, as well as representatives of Bitcoin start-ups AvatarBTC, Coinffeine, and ATM Bitcoin Spain.

Five of the teams were from the Master in Management’s English track and two from the Spanish track. “BitProducts” was the title of the winning project, which came from one of the Spanish track teams. Their idea is to partner with food brands to offer Bitcoins as a reward for purchases.  Upon checkout at the supermarket, the person would receive a QR Code on their receipt, as well as a recommendation for Bitcoin wallet software to redeem them.

“Once someone has Bitcoins, chances are they will find a way to spend them,” said Paula Virosque, during the team’s presentation. She said her team decided to focus on supermarkets because its where Spaniards make the most transactions, and associating the digital currency with well-known brands would help build trust.

“What’s brilliant about this idea is that it’s so simple, yet no one’s done it. You’re proposing something incredibly practical,” said José Luis Várez Benegas, member of the judges panel and co-founder of AvatarBTC, a Spanish Bitcoin exchange platform that launched earlier this year.

Most students said they knew almost nothing about Bitcoin before starting the project.

“I think it’s a very good idea as an investment tool, but implementing it as a physical payment method is tough,” said Daniel Colino, a Spanish student who grew up in Luxemburg who was on one of the finalist teams. His team proposed a niche online shop for selling local goods in Bitcoin. 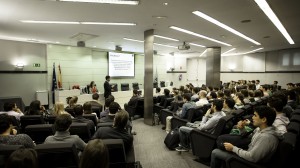 The i2i challenge came at a time when Bitcoin startups seem to be gaining traction in Spain.   An organization called Bitcoin Spain is behind efforts that have led more than 50 brick-and-mortar stores to start accepting Bitcoin in Madrid. Most of them are on Calle Serrano, which has been dubbed “Bitcoin Boulevard Spain.”  (Link: http://callebitcoin.es/english.html). There are also new Bitcoin ATMs, where Bitcoin can be bought and sold, in both Madrid and Barcelona. ATM Bitcoin Spain plans to install about 100 ATMs around the country over the next few months. (Link: http://www.atmbitcoinspain.es/)

As part of their market research, most students visited Calle Serrano, the luxury shopping street that runs through IE’s campus, to try using Bitcoin at one of the shops. But most said they faced challenges, upon entering one of the stores that said Bitcoin was accepted.

“Most shops that say they accept Bitcoin aren’t prepared to make a transaction,” said Felice Biancardi, a MIM student from Italy.

He noted that it is much easier to buy things with cash or credit card, and there’s no incentive for a shopper to use Bitcoin. Those were among the most common Bitcoin challenges all teams identified, as well as the perceived volatility of the digital currency. People don’t see it as a safe payment method. But many students came up with innovative solutions. One team proposed a bitcoin keychain or credit card that would allow Bitcoin purchases for small amounts that would fall under the credit card limit at many local shops. Another proposed a mobile application where Bitcoin could be used for online gaming.

The i2i Consulting Lab takes place twice per year with each intake of the Master in Management program, where students tackle a real world business problem. The judges said the outcome of the Bitcoin challenge went above and beyond their expectations. “It’s impressive the work they’ve done in such a short amount of time,” said Carlos Lobato, of ATM Bitcoin Spain.

Nicolas Cary, of Blockchain, said the quality of the presentations matched those he has seen from funded start-ups.

“The teams clearly used professional frameworks for evaluating problems and bringing solutions forward,” he said. Cary encouraged students to pursue their ideas further, noting that more than $300 million in venture capital has been invested in Bitcoin businesses to date. 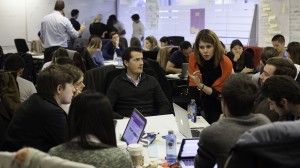 Spain is back! IE Venture Day 2014 in MadridKey dates for the February 2015 intake